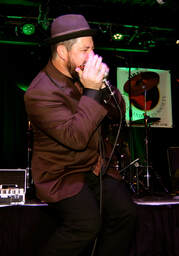 Bill Lifford, President of the Long Island Blues Society
4/19/2021
Like many people, the last few years have really opened my eyes to the injustices experienced by Black Americans.   For me, personally, the murder of Trayvon Martin was the first time I realized that American society still has a long way to go toward our collective dream of truly treating everyone equally.  I began to do some research, watch some documentaries, do some reading, talk to some people.  Killings of unarmed black men and women by police dominated the news.  Black Lives Matter became a national movement.  As you read this, the trial for the killing of George Floyd has been in the news every day.  But let’s talk about Blues music.
Blues music is – at its very core – Black music, borne of the experiences and suffering of Black people here in America.  There’s simply no escaping that truth.  Lots of white people love the Blues and love to play Blues, but we must recognize that without American society’s cruelty, mistreatment and violence toward Black people, the Blues as we know it wouldn’t even exist.  And then, by extension, Rock and Roll wouldn’t exist either, at least in the form we know it now.  The Black American experience, with all its beautiful moments and its horrible moments, is the foundation of Blues, Jazz, Gospel, Rock and Roll, Soul, and countless other forms of the music that make up the soundtrack to our lives.
So how can we acknowledge that Blues is Black music, and how can we respect that history and ownership as musicians and music fans?   Our mission statement reads:
"The Long Island Blues Society is a 501 (c)(3) non-profit corporation dedicated to the furthering of blues music and culture as a living art form. We are committed to the spread of live blues, and the preservation of blues as a unique American musical tradition."
That says a lot in just a few words.
​    Think about the elements of our mission statement… it says things like “…dedicated to the furthering of blues music and culture as a living art form…”     “…committed to the spread of live blues, and the preservation of blues as a unique American musical tradition.”  These words mandate the Long Island Blues Society to be an active force in the local music community. We have worked hard to establish the Long Island Blues Challenge that sends our champions to Memphis for the International Blues Challenge. We support our champions fiercely with fund-raising concerts and our members attend the IBC to root on our acts.  But I think there is more we can do.
How can we truly live up to our mission statement if we don’t make an effort to find, encourage and support the Black Blues artists in our region, which stretches from the East River to the eastern tip of Long Island. We should also strive to attract the best regional and national Black Blues talent to come play on Long Island. Without these elements as part of our LIBS agenda, I think we fall short.
Now, I’m not going to get into whether white artists have the “right” to play Blues music, or whether white artists (like myself and many LIBS members) are appreciating or appropriating when we play Blues.  Those are deep philosophical questions that every musician must ask themselves, and it’s certainly beyond my scope of practice as LIBS president.  Sometimes, I feel one way about it, and other times I feel differently -- it’s complicated.   I have no doubt that all of you have a deep reverence for Blues music and its founding fathers and mothers, and I’m certain that you are cognizant of its origins.   I love Blues music deeply – it speaks to my soul, and when I play harmonica, I’m trying to show my respect, admiration, and appreciation for those who gave us this precious original American art form (and suffered terribly while doing so).  But when I think about the circumstances of the birth of Blues music, and how Black Americans still face adversity and racism today, it hurts.
To that end, I call upon the members of the Long Island Blues Society, those who organize Blues shows and concerts and festivals, those who book bar gigs, and others:  Let’s start talking about how we can make Long Island a place where our local Black Blues artists feel supported and respected, where there is an equal opportunity for Black Blues artists to share the stage with other artists, and to make it a place where touring regional and national Blues acts (especially Black and PoC Blues artists) can find opportunities.  I think we can do this easily, as I’ve never seen the LIBS be anything except a positive force trying to build community and camaraderie among musicians and fans.  We have the Blues fans, we have the Blues lovers, we have a strong community, we have kind and open hearts.   The Long Island Blues Society can’t fix deeply imbedded societal racism; that’s just simply beyond what we can do.  But we CAN make our little corner of the Blues music world a better, more inclusive, and more encouraging place to be while respecting the Black ownership and origins of the music we love so dearly.
​  Thanks for reading.  I wish you all well in 2021, and I look forward to seeing us all out on the music scene again as it becomes safe to do so.
Bill Lifford
President, Long Island Blues Society